I met a Mamba today.

I was driving home after a short excursion to talk to an elephant.

It was right next to the road at the door of the Landie, six to eight feet of sleek, serpentine energy, with two feet of raised expectancy and flared readiness lifted off the ground in anticipation of a confrontation.

I am glad we had a mutual understanding of self-preservation and inter-specific respect.

After a brief moment of eye contact, I think we were both relieved to go our separate ways. 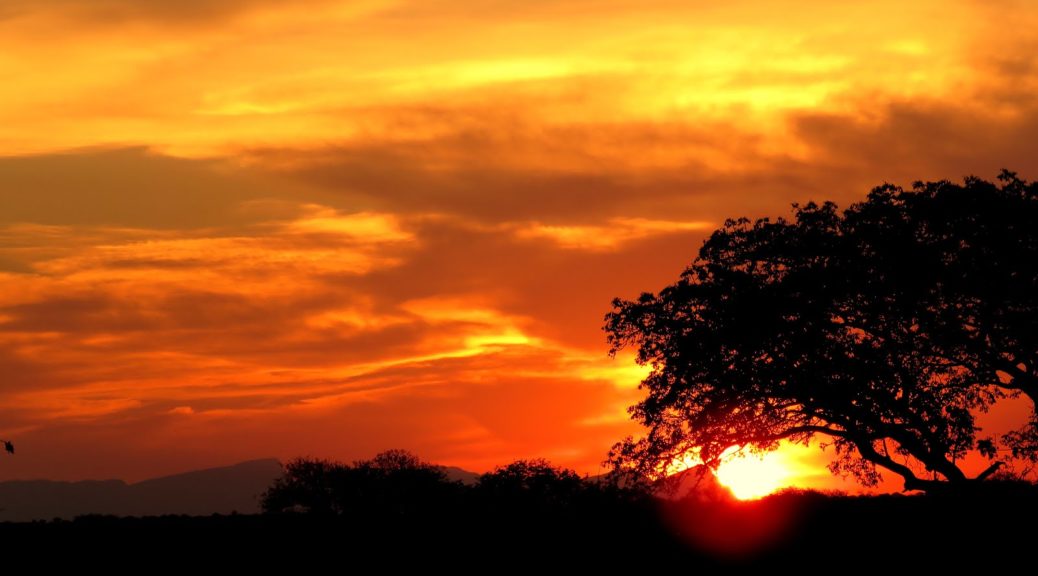 In early December, I had an ele encounter on the eve of the death of a girlfriend from my youth. After 35 years, I still sometimes think about our teenage love and her last words to me when, as a love-struck 17-year-old, I professed my love for her and her reply was blunt and off the cuff. She told me that I would get hurt if I loved her and it was better not to. Even better not to voice it, considering her troubled childhood and the abuse she suffered at the hands and fists of an alcoholic step-father.

I bore it no mind at the time but a short while later, it turned into a prophecy with her shocking and untimely death. She was only 18 and it happened the weekend we finished high school. It was a marked event in my life and since it coincided with the death of John Lennon, every year that the world was reminded of its loss of an icon, I was reminded of the loss of young love. Ever since then, I take note of what happens on the day and try to do something in her memory.

These days it usually involves elephants and on this particular dry Summer’s day, it was no exception and I thought that an ele encounter that I had had just before sunset was my requisite event of the day; not too overwhelming, but quite satisfying.

It was the second encounter of the day that was so much deeper and more profound. A moment in unexpected time when the universe lets me know that all is well with my world.

I was driving out of the Mansimvula entrance, a small two track that leads off of the main road that runs through the Timbavati. It was as I turned onto the main road heading East, I was still in second gear and about to accelerate down towards the Nhlaralumi River where there is still some water in a big pool and usually there is something there of interest.

He obviously heard me approaching in my Landie and because he was so close to the road, I guess he assumed I would see him sooner than I did. The sun had set, it was that time of dusk when it gets too dark to see well enough and yet still too light to use lights. My eyes were elsewhere and the first moment I noticed him, he had come to the edge of the road and he was right next to me.

As soon as I saw him, I switched off the engine, bringing the Landie to a halt with the engine off and a slight crunching of the tyres on the gravel that was spread on the road surface. I wasn’t sure how he would react to my intrusion, one never knows, there are so many factors to take into account with such a close proximity, particularly in the last light of day.

He was browsing peacefully, unperturbed by my sudden intrusion, perhaps a sign that he’d been listening to my slow approach and had possibly recognized the sound of my Landie. As I turned in my seat to look at him only a couple of metres away, he lifted his head with his trunk down and ears slightly flared, as though in surprise at my movement and almost as though he was taken aback and considering why it had taken so long to recognize him. I apologized. Verbally. Respectfully. Quietly.

He acknowledged my error in judgment, relaxing head and trunk and continued to strip Mopane leaves; more as a distraction than an effort to eat. After some time, he lifted his head once again from the stunted tree and, in an ephemeral moment of interest, looked down his trunk at me and then continued to strip leaves from the branches. 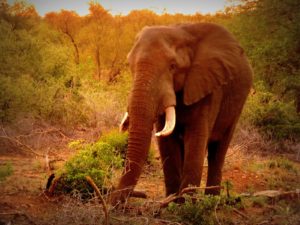 We sat like that for a while, comfortable in each other’s company, enjoying the relative coolness of the evening. After some time, maybe a few minutes (for time with an elephant is meaningless), curiosity got the better of him and he couldn’t hold back anymore. He stepped forward and acknowledged my presence by coming up to my Landie, testing my trust and resolve.

I sat humbled and awed below his imposing height and I didn’t move but for the bowing of my head and the sound of my most respectful of greetings. His trunk stretched out towards me and, in turn, I reached out my arm and presented my hand, a poor substitute for a trunk. We were only a few inches apart, each stretching for mutual acceptance, yet each reserved in our place in this mad world. 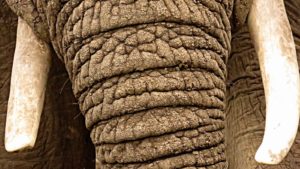 Moments later, he lowered his head, relaxed his body and as he slowly turned away he let out a huge sigh followed by a blast of air expelled from his trunk. Only then did I notice how dark it had become. As only a new moon’s darkness can descend on a cloudy summer sky and he became as one with the surrounding bush and oncoming night. I reluctantly turned around to head home to the calls of waking hyena and the high pitched sonar of swifts and bats.